The kinds of chart layouts produced by reflective symmetry (as described in my last post on the topic) can make the columns along the line of symmetry look a bit clunky. This post explains a way to fix that. If you find anything confusing about it, I would very much appreciate it if you told me!

This is part of my rewrite of the instructions for how to embed words as stitch patterns.

When I look at the last sample chart for peace produced by various symmetries, something that leaps out at me is the horizontal bar of two black squares next to each other, caused by two identical columns sitting next to each other. Sometimes I like this kind of effect and sometimes I don’t—it depends in part on what kind of stitch pattern I’m trying to make in the end. The thing to know is that there is a way to remove the extra columns and still retain the code aspect.

To simplify matters, I’ll be working with the following small unit, which wasn’t based on any encoding. It’s just a basic angled line. 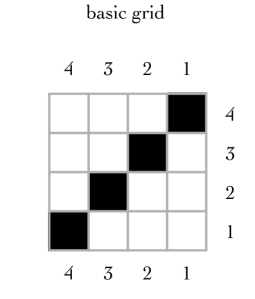 If I reflect this along the line to the right of column 1, and then translate the result (so that all the results of repeating the grid are visible), I get this layout:

The original grid is reflected back and forth across the lines between columns 4 & 5, 8 & 9, 12 & 13, and implicitly between 16 & 1 (if this is a stitch pattern to be repeated multiple times). This shows two repeats of a stitch pattern that is a repeat of 8 stitches and 4 rows.

This could be nice, but what if I wanted a nice sharp point at the top and bottom of the zigzag line?

What’s required is a slight shift in thinking. I made the reflection along the edge of the columns. What would it look like if I had made the reflection from the middle of the column? Since I’ve already made this chart, the simplest way to do this is to remove the duplicated columns. Please note: if trying to retain the secret code aspect, this should only be done at the borders of the code grids, not in the middle.

Here I have highlighted the duplicated columns.

And here I have removed all but one extra. I didn’t remove column 16, because it wasn’t actually touching anything. There is something that needs to be done about it, though, since otherwise it will be duplicating column 1 when the pattern is repeated for knitting.

Finally, I simplified the stitch pattern to one repeat, plus an extra column on the left for if the design is to be worked flat. (This is how to deal with column 16 above.) The chart shows a stitch pattern that is a repeat of 6 + 1 stitches and 4 rows. Now all the places where the original unit is mirrored are sharp and crisp.

Now I will work in my loose ends and show you what the peace chart I used as an example above looks like with the same maneuver:

And here is the simplified chart to work with: 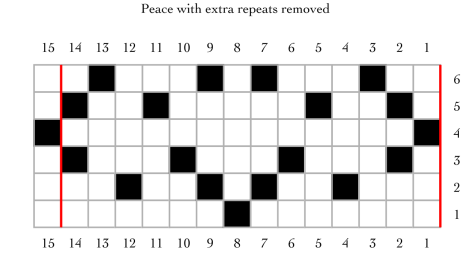 Next up: what do I do with all these black squares anyway? How do they get turned into a stitch pattern that isn’t colorwork?