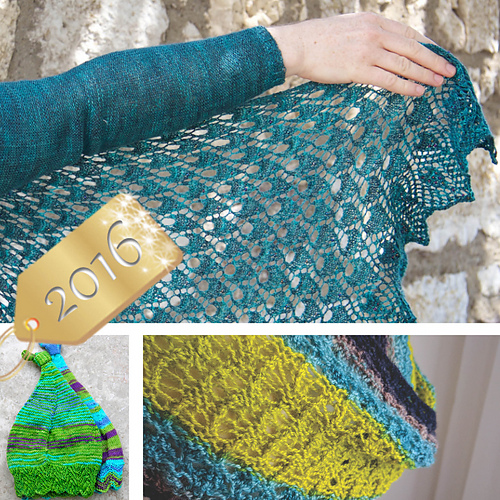 One of the things I like about the Gift-a-Long (Ravelry link) is working with other independent designers on a giant project. It’s a nice way to support each other. I also like introducing some of them to my followers.

I met Robynn on Twitter this year and then realized we’d been in the Gift-a-Long together in previous years. Somehow this is extra satisfying. 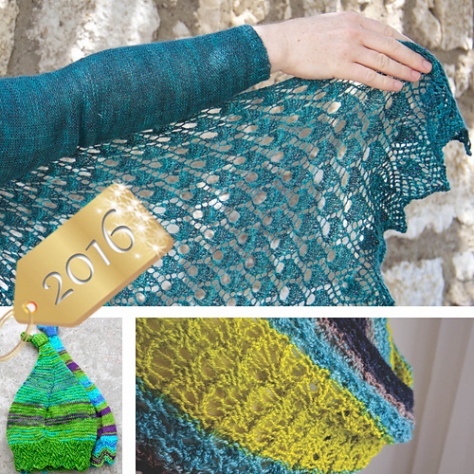 1. Please tell us a little about yourself.

I’m from Cape Town, lived in London for a decade, now settled in Switzerland. My day job used to be in publishing – newspaper/magazine sub-editing and layout – but since English publications are scarce over here, and I have small children at home, I’m largely unemployed. Plus side: having got through the impossible baby phase, I am starting to have more time for design. And my publishing background is handy for producing patterns!

2. Which of your patterns do you think are great but are overlooked?

That’s a surprisingly hard question, because most of my patterns I think – with a bit of distance – are nice, but not great. The few that I’m really proud of have gotten attention, if not always sales. Given the mass of patterns out there, I can understand that they didn’t stand out. I really love Purzelbaum (Ravelry link), though. I’d love to see more people trying that.

3. What attracted you to joining in with the Giftalong?

In the first year I participated as a knitter, and it was so much fun. Every year since then I’ve looked forward to it (and worked hard in 2014 to get my fourth pattern out just in time to qualify!). I always think I don’t have time for unscheduled, non-work projects and yet there’s so much inspiration and motivation, it’s impossible to resist, and then I turn around and I have a small pile of gifts I’m thrilled to give and how did that happen?!

As a designer, it’s really gratifying when a lesser-known pattern gets some love. And doing these interviews has been a wonderful chance to learn more about my fellow designers.

4. What are a few patterns from the Giftalong that have really caught your eye?

I haven’t had much chance to look yet (which is driving me crazy!) – my collaborators and I are still releasing patterns from our Lost in the Woods (Ravelry link) collection, which has been our big challenge for the past 18 months. But from what I’ve seen so far, the Ruckle (Ravelry link) hat by Jennifer Dassau has jumped straight into my shopping cart. As has Tailfeather (Ravelry link) from Baroque Purls – I saw that on Instagram a few weeks ago and was smitten! Adrienne Ku’s Secret Summer (Ravelry link) is exactly my kind of lace, and I swear, I was going to say that before I saw it’s your stitch pattern. Christal Little’s Pullman (Ravelry link) is a great men’s jumper. And look. That’s just the first page of the thread…

5. I see you’ve lived in lots of places. Did you knit much when you lived in South Africa? Have your knitting habits changed much since moving to Switzerland?

I always did knit, but yes, my habits have changed a lot. Brace yourself, I’m not going to keep this short. In Cape Town, the problem wasn’t the climate; it was that I couldn’t easily get to a yarn shop, and I didn’t know anyone outside my family who knitted. So my knitting habits were: on the rare occasions we got a lift, my mom and I would go to one of the factory shops that made clothing but sometimes sold yarn (usually for machine knitting). Grab whatever looked cool and figure out what to do with it later. Without benefit of pattern. This meant that I considered myself a pretty shit hot “designer”, because I made it all up myself, but I hadn’t learned much about things like gauge!

In 2002 I moved to London. Knitting was on the upswing, knitting blogs and online shops were a thing, and I could shop at John Lewis which was so unbelievably exciting, I literally got sensory overload and often had to walk out without buying because I was dizzy and nauseous from bingeing on colour. I’m not even kidding. It was exhilarating, but I still had the habit of grabbing whatever yarn I liked, without really thinking about what I’d do with it. And of course I never had the time to actually knit up half of what I wanted to. So I still wasn’t learning all that much.

Then I started a webshop, Purlescence.co.uk, to bring all the amazing stuff I was seeing in the US magazines and websites over to Europe. Which meant that (a) I had access to incredibly beautiful supplies (and still hadn’t learned to plan first, shop later), but (b) I had no time at all to actually knit. Which sucked. Especially after I had a baby. Eventually I sold the shop, because balancing that with my very demanding firstborn really wasn’t working, and I finally had some knitting time! And an absolutely GINORMOUS STASH.

And then I had another baby, and moved to Switzerland, and yes, the knitting context changed again. Knitting is both more and less common here than I was used to in my London circles, which admittedly had grown up entirely out of knitting connections. I can walk from my flat to two yarn shops – astounding! – but neither of them has much of a selection. Everybody here learns to knit in school, but none of the people I’ve met locally knit. It’s still got quite a granny image. Although just recently, I’ve noticed knitting popping up in all sorts of ads not actually related to knitting, which is interesting. The Swiss Wulle Festival started last year; it feels like there’s maybe an upward trend that I saw in London five years ago, and which happened in the US five years before that. Not that I’m complaining. It’s great timing for me! I do still feel rather more isolated from other knitters than I was used to in London, but fortunately there is the interweb…

When I think about how my knitting has changed with my home, I’d have to say I can be far more deliberate now. I choose my yarn more deliberately (that amazing stash never seems to have exactly the right thing for my next urgent project, which is annoying), and I plan my projects far more carefully. Of course I also knit things I never saw the need for in sunny South Africa – hats? people actually wear knitted hats?! – and I use wool, not just cotton!