You might have noticed that I knit a lot of swatches. I’ve been getting fussier about how carefully I block them, and have been getting more consistent about using a short blocking wire (or skinny metal knitting needle) along each edge. Recently I’ve been pondering my swatch selvedges, and thinking about how to make it easier to thread the blocking wire through them. I remembered coming across a selvedge that uses yarnovers at the very edge, and decided to try that, at least for swatches.

It does make for easier blocking; I’m not yet convinced I like the look of it, though that doesn’t matter so much for swatches. I might try the yarnovers on every other or every third row instead.

When I turned the knitting to work the wrong side row, I put the needle behind the yarn so that when I worked the first stitch, the yarn would make a yarnover before that stitch. Then I knit the first two stitches together. (Because of the way I wrap my stitches, I did a left-leaning decrease (ssk). I would recommend just doing what comes most easily, which is probably k2tog.) Then I knit 1, purled until three stitches remained, and knit those.

For each row, I continued this pattern: YO, decrease 1, k1, work in pattern across to last three stitches, k3.

Next time I do this, I might try this instead, just to see how it looks: YO, k1, k2tog, work in pattern to last three stitches, k3.

And here’s a series of pictures showing how I blocked it: 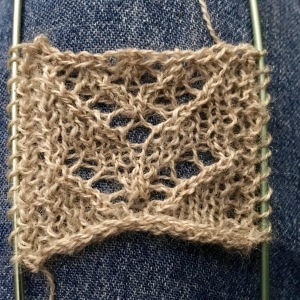 Since the swatch was small, I decided to soak it after working the blocking wires through the edges.

If blocking something larger, you may need to put pins in spots between the corners to keep the wire straight. 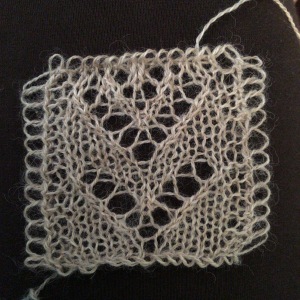 And here’s the end result. I think this looks tidy enough, though I don’t think I’d care for the effect of the corners on an actual finished object like a shawl. This might be a side effect of the way I threaded the needles through the cast-on and bind-off, however. Further experimentation is in order.

If you like my posts like this, please consider supporting me on Patreon or donating with my Paypal tip jar in the sidebar. Thanks!