M1 is a good, basic increase, but it leaves a visible hole. There’s a slight modification of the technique that mostly hides this hole. The two versions of this are M1L (make one left) and M1R (make one right), which are mirrors of each other. This post is about the paths the yarn takes while forming the stitches, not how to make them. Here are some good illustrated instructions showing how to make m1 L and m1R.

END_OF_DOCUMENT_TOKEN_TO_BE_REPLACED

I had a specific request to do one for kfb (knit in the front and back of a stitch to make two stitches), but I’m not going to start with that. I’m going to go through a whole sequence of basic increases, starting with M1.

M1 (short for “make one”) is actually a tricky abbreviation, as it sometimes gets used for all kinds of increases. (The Mon Tricot books, for instance, use m1 as the abbreviation for any increase throughout, and define it within the instructions for each stitch pattern.) However, there is one increase called m1 which has no other name that I’ve ever seen*. So I’ll start with its most basic form.

*I haven’t seen every knitting guide in the world by a long shot, so I’m guessing someone has probably called it a “lifted increase”, which would be confusing given that there’s a different increase I know with that name.

END_OF_DOCUMENT_TOKEN_TO_BE_REPLACED

So far I’ve written a series of blog posts about knitting stitch structure, and the three paths the yarn can take between two stitches if it isn’t pulled through a stitch that is between them.

This post is going to be different, and it starts with a story.

END_OF_DOCUMENT_TOKEN_TO_BE_REPLACED

I’ve talked about knitted slipped stitch structure, where when a stitch is slipped, the yarn that would otherwise be pulled through the knitted stitch below forms a horizontal bar that can either sit in front of or behind the slipped stitch.

There’s one major remaining straightforward place for that strand of yarn to go when a stitch is slipped, and that’s to sit immediately on top of the slipped stitch. In hand knitting, this structure is called brioche.

END_OF_DOCUMENT_TOKEN_TO_BE_REPLACED 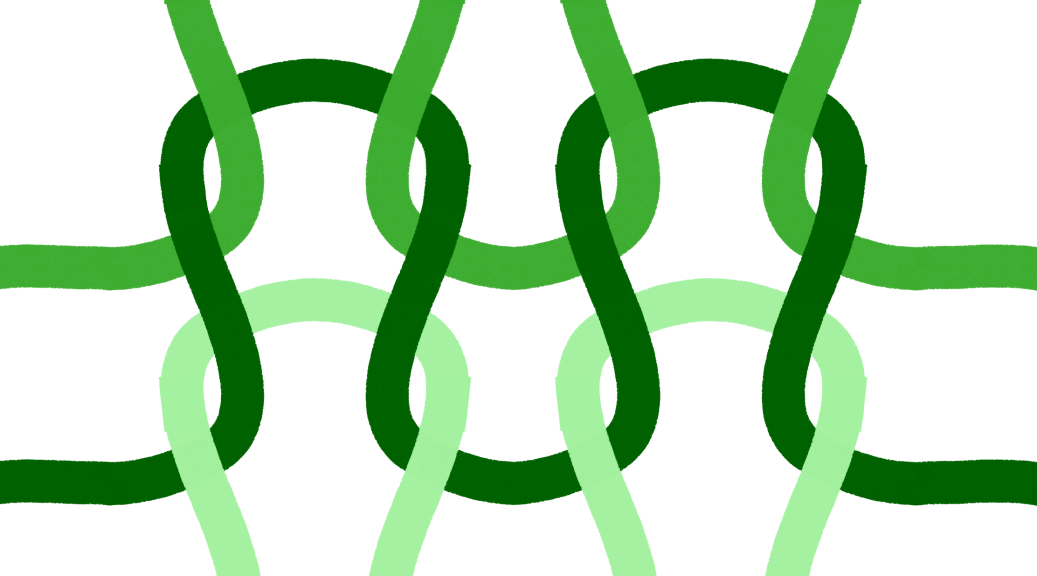 Last week I wrote about how the basic knit stitch is formed. This week I want to talk a little bit more about basic knit fabric.

END_OF_DOCUMENT_TOKEN_TO_BE_REPLACED

I’ve been writing a series of posts about knitting stitch structure:

And now I want to move on to a mildly more complicated question.

END_OF_DOCUMENT_TOKEN_TO_BE_REPLACED

I’ve got a knitting technique structure thing I want to talk about, but I think it will be easier if I do it in stages, both to write and to read. So this time I’m going to write about basic knitting stitch structure.

Knitting is about final results, regardless of the method used to get there. So finger knitting, loom knitting, knitting on needles, and machine knitting are all different ways to produce knitting stitches. In this series of posts, I’m going to leave the tools used out of the picture entirely, and just show the stitch structures involved.

END_OF_DOCUMENT_TOKEN_TO_BE_REPLACED

The other day I was attempting to design a stitch pattern using lace faggoting as a background mesh. (I could wish for a different  name for this class of lace stitch, but there it is. Here is more information about the term.)  Faggoting, when worked alone, is all yarnovers and all decreases, all the time, on both sides of the knitting. I’d worked a practice swatch in one yarn, and then started another, only to be perplexed by how different the mesh looked.

On further examination, I realized that I had accidentally switched which faggoting stitch I was using.

Barbara Walker lists three in her first Treasury, and accounts for the difference by speculating that it’s caused by the possibly longer yarnovers in Turkish Stitch, because the decrease in Turkish stitch is purled. This turns out to be incorrect, as I will show below. The slightly different structure is actually responsible. There are four possible permutations, and two structures.
END_OF_DOCUMENT_TOKEN_TO_BE_REPLACED